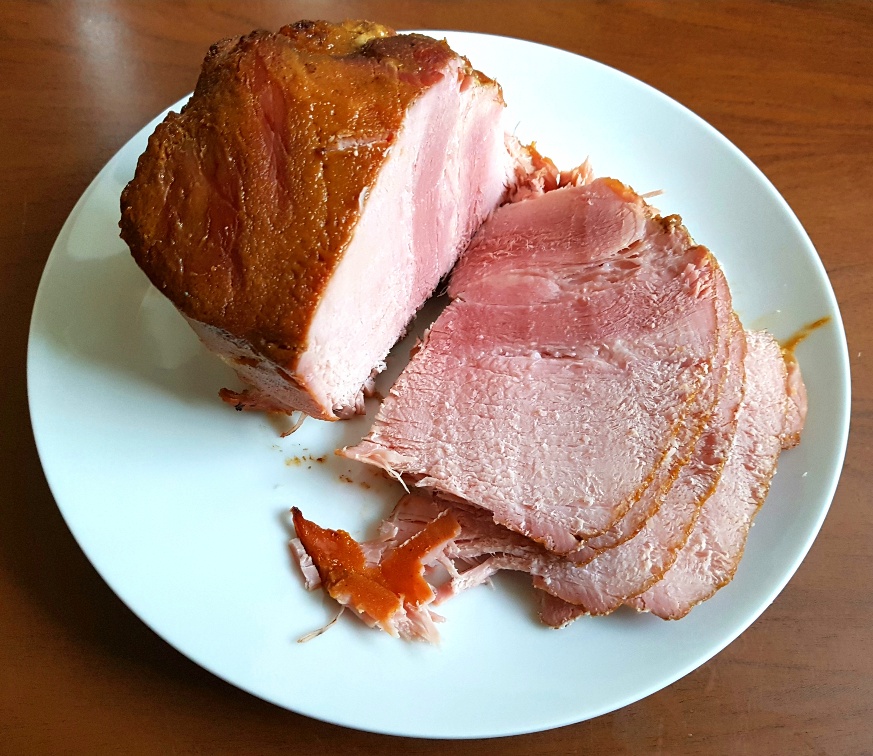 Christmas Ham by The Fat Foodie

I first made this Christmas ham about six years ago and it’s become a regular staple on our family’s Christmas menu ever since. We normally have this for dinner on Christmas Eve, but there’s always some left over, so it tends to accompany the turkey and trimmings on Christmas Day too.

This is quite a simple recipe, but it’s no less tasty for it. In fact, I’d say it’s a benefit. After all, why complicate food when it’s perfectly delicious as it is anyway? Although I initially cook my ham in plain water you can choose to cook the gammon in fresh orange juice, if you like, which makes it quite sweet and fruity, but it’s not necessary because it’s tasty enough as it is due to the infusion of spices.

Cooking the ham in water (or orange juice, if you so choose) ensures that the meat is kept moist as it simmers while also enabling the spices and flavours to permeate into the water and go into the meat itself. Once the ham’s been cooked in the water the mustard and brown sugar is mixed together and baked on top of the ham to create a crispy, aromatic glaze which perfectly complements the flavour of the spices.

As I’ve said, we tend to have this Christmas ham for dinner on Christmas Eve because it can feed a lot of people, particularly if you serve it, as we do, with a table full of cheeses, crackers, fresh crusty bread, fresh salads, pickles, crisps, dips and whatever other indulgent treats the kids can persuade me shouldn’t just be kept for Christmas Day. However, that’s what Christmastime is all about after all, isn’t it?

Ingredients for the gammon:

The zest of 2 oranges

Put a large pot over a medium heat and put the gammon in it. Cover it with enough water so that it’s just covered on top.

Add all of the spices and the orange zest. Quarter one of the oranges you took the zest off and add the orange quarters into the water.

Cook the gammon for two and a half hours and then remove it from the water and put it in a roasting pan.

Mix the brown sugar with the Dijon mustard and coat the gammon in it.

Roast the gammon in the oven for 20-30 mins until the top is crispy. Serve.