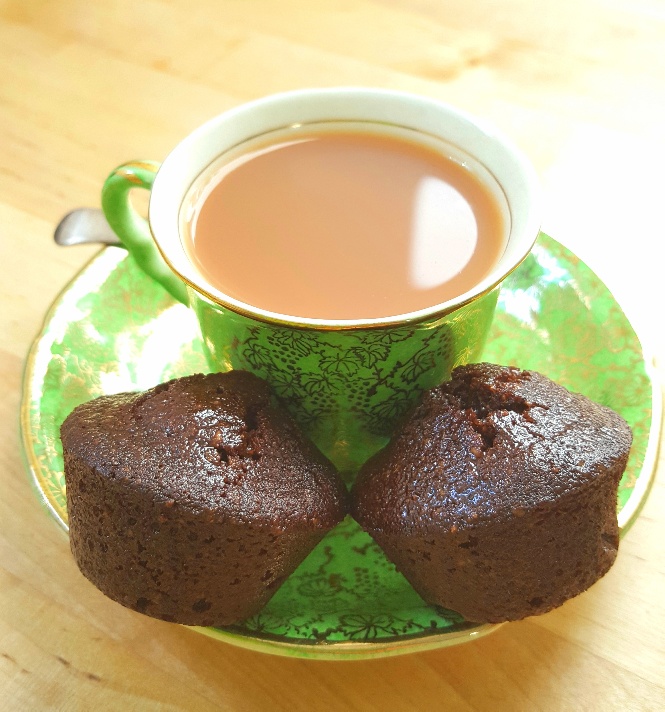 Financiers by The Fat Foodie

, and her lovely publisher at Kitchen Press, Emily Dewhurst. Although Kirsten had generously brought along a veritable buffet of delicious baked sweet treats to her book signing, I couldn’t eat any of it because days before, I’d eaten a meal which included onion rings, had a horrible IBS reaction that evening, and then after some research that night I began the low FODMAP diet exclusion period the day after. However, I had a great chat with Kirsten and Emily about trying to live gluten-free and Emily very kindly emailed me a cracking recipe for gluten-free almond financiers the following day. She’s so nice!

I’ve never had a financier before, but I’m astonished at how tasty they are and how easy they are to make. Financiers are small French cakes that are based on ground almonds and are normally baked in small rectangular cake tins which make them resemble bars of gold. Hence the French name ‘financier’. They are light and airy, but remain moist upon cooking and last for quite a while in the biscuit tin. I don’t have a cake tin that resembles anything like a gold bar so I just baked mine in a mini muffin tray

and they turned out brilliantly.

Now, I’m going to ‘fess up here. I screwed up the first batch I made. It was such a simple mistake, but one that could have been avoided if I’d been focusing more on double checking the ingredients. Basically, I used salted butter instead of unsalted, but this meant that when it was added to the 1/2 tsp of salt the original recipe required they were massively over-salted, to the extent that when I first tasted the financiers I spat them back out because they were far too salty.

The thing is, I always use salted butter (even in my cakes) because salt adds seasoning and contributes a fantastic dual taste component to sweet dishes. In fact, most American cake recipes state that you should add some salt because they understand very well how the sweet/salty combination works. Sadly, in the case of my first batch of financiers however, it was simply salt overload and didn’t work. That’s why I’ve removed the added salt and just stipulated that you should use salted butter instead. It takes away the possibility of you making the same mistake as me. You’re welcome.  😉

Joking aside, if you enjoy a sweet treat, particularly one that’s packed with almond flavour, then this is the recipe for you. Although they’re based around ground almonds, a portion of one financier contains just enough almond to keep the cakes low FODMAP. After baking, the financiers turn out as sweet, rich little almond-scented cakes that are enriched with browned butter and dark cocoa powder. They’re not dairy-free because I really think you need the flavour of the browned butter to be true to a traditional financier, but they are gluten-free. However, if you’re dairy intolerant you could certainly have a bash at making them with dairy-free butter. You’ll still get a tasty almond cake, but it will lack the butter flavour. Whatever way you decide to make them, I’ll bet you give them a thumbs-up.

85g of salted butter (or dairy-free or coconut oil)

Grease and flour your mini muffin tray so the financiers don’t get stuck inside upon baking.

Melt the butter in a saucepan until is goes slightly brown and smells caramelly and then let it cool down slightly. (If you’re using non-dairy butter then just melt it and leave it to cool. You don’t need to brown it before using it, it just needs to be liquid.)

Place all of the ingredients into a mixing bowl and add the browned butter.

Lightly beat the egg whites and then fold them into the mixture.

Leave to cool slightly before eating.

Financiers by The Fat Foodie

One thought on “Financiers (makes 16)”