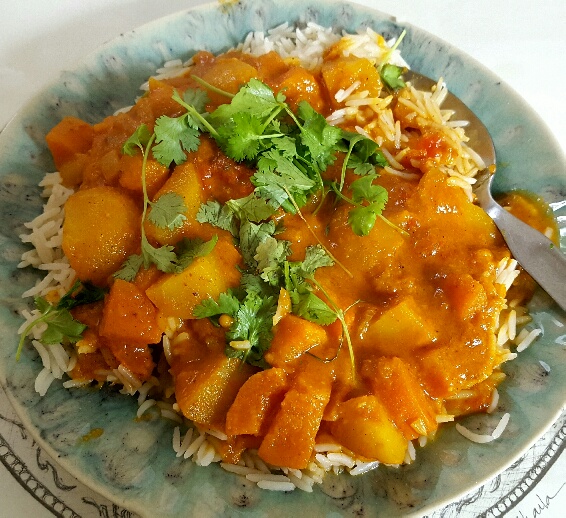 Yesterday, in a determined effort to eat a bit healthier, I made a cracking vegetable coconut curry. The main reason for making it was to use up some mangetout I’d had sitting in the fridge, but sadly I forgot to add them! Although the curry lacked a bit of greenery (hence its overall orange glow!) it was still packed to the gunnels with mixed vegetables and was held together with the addition of coconut, making it taste really creamy and decadent even though it was dairy-free.

Most curries rely on a base of fried onion and garlic to add that sweet, caramelised background note that’s so prevalent in Indian cooking, but they’re like napalm to my digestive system so there was no way I’d put them in my curry. However, I’ve recently discovered a fantastic spice called asafoetida powder

which tastes exactly the same as onion (and has garlic flavoured tones through it too) and it genuinely adds the flavour of garlic and onion into my cooking without having any negative effects on my tummy. Try it, guys. Asafoetida

I made quite a large pot of the vegetable coconut curry, so there were plenty of leftovers. I froze a couple of portions to take to work for lunch throughout the week, but I think we’ll also be having this for dinner tonight too. I’m really looking forward to it though, because the flavours and spices will have been marrying overnight so it’ll taste even better today. (I always think curries taste better the next day, don’t you?)

I’m also having a bash at making my own naan breads for the first time. The dough is rising in the kitchen as we speak (so to speak). I intend on making two types: a sesame seed one and one sprinkled with nigella seeds (aka black onion seeds). Sadly, as much as I’d love to give it a whirl, I think attempting a peshwari naan (a filled naan stuffed with a mixture of ground pistachios/almonds, raisins/coconut, and sugar) might be a little ambitious at this stage.

I’m sure you’ll hear in a future blog post how I get on, but in the meantime wish me luck!

1 tsp of salt (add more to taste if necessary)

, ginger and chilli and continue to fry for 5 mins, stirring frequently.

(Have a good ol’ sniff at this stage because it smells fantastic!)

Add the tin of chopped tomatoes along with the turmeric, curry powder, desiccated coconut and salt and pepper. Continue to cook for 5 mins, stirring frequently.

Add all of your prepared vegetables followed by the tin of coconut milk. Gently simmer until the potatoes are soft to the touch and cooked through.

Sprinkle with chopped fresh coriander and serve with rice, naan breads or poppadums.