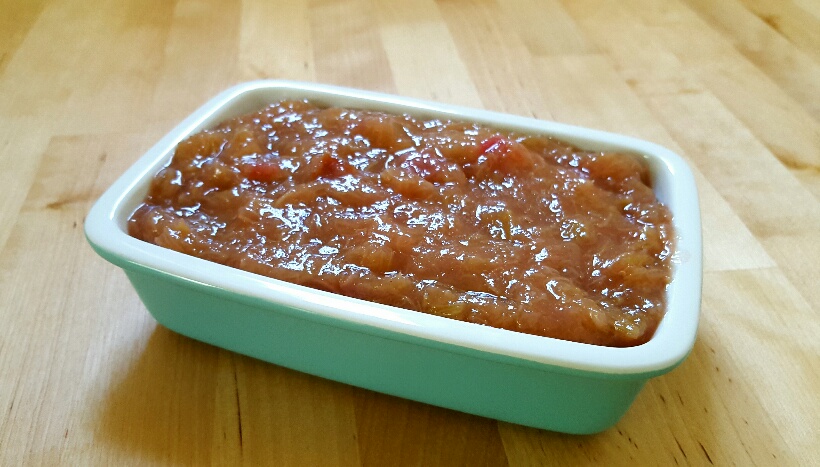 Lately, a couple of generous individuals have gifted me handfuls of rhubarb stalks, but for a couple of reasons I’m not entirely convinced that they’re being given to me entirely altruistically. For one, rhubarb grows like a triffid, producing huge leaves to soak up the sun which they use to create a late spring to early summer crop of deliciously tart harvest produce. The problem with these massive leaves is that they block out the sun for the herbaceous neighbours of said rhubarb plant. As a result, most gardeners will happily prune their flourishing bushes by ‘gifting’ the stalks away to friends, neighbours, or in my case, their daughters.

The second reason for giving away the rhubarb is one that I cannot find fault with though. You cannot blame a gardener for donating an abundance of rhubarb when they know they’ll receive a tasty, sweet rhubarb dish in return. This is the very essence of food produce trading and it’s one which benefits both parties.

Although I sometimes find myself cursing those who give me rhubarb when I’m relentlessly sawing away at the rhubarb trunks before stewing them (because I simply cannot bring myself to just throw them out) I still find myself enjoying the rhubarb as its grassy, lemony, acidic fragrance coats my hands. The smell always reminds me of being a child and every year, as I fondly remember dipping a relatively ripe rhubarb stalk into a poke of sugar as a kid and thinking it was a real treat, I pop a small chunk of rhubarb into my mouth to test whether it really is as tart as I remember and my lips disappear behind my teeth in response to the sheer overwhelming sourness that floods my mouth. Good times.

Even though there are easier, and tastier, fruits out there to cook with I never object to rhubarb though. There’s something rather ancient about it, I think. Apart from the fact that the plant looks as though it belongs in the Jurassic era, its stalks have been turned into delicious confections by optimistic cooks for hundreds of years. Surely this is a tradition which must be continued by those who are willing to do battle with a crop so heavily infused with acidic bitterness?

To make my rhubarb compote I chopped up the freshly washed rhubarb, put it in a large pan with a couple of tablespoons of water and added sugar to it before putting it on a medium heat. The amount of sugar you add is pretty much according to your own taste, so add a few tbsps of sugar to the simmering rhubarb, taste it, and continue to add more until it suits your palate. I generally go with around 70-100g of sugar to 700g of chopped rhubarb. You’ll probably need quite a lot of sugar. Just be careful when tasting it because it’s incredibly hot!

The rhubarb compote will keep in the fridge for a good couple of weeks and you can use it for loads of different things: as a jam for toast or scones; to top porridge or ice cream; folded into whipped cream to make a syllabub; as the fruit base for a crumble or cobbler; or (if you want to pair it with a savoury item) to serve with pork dishes. The list of ways to celebrate such an unexpected, and yet rewarding, harvest is endless. Rhubarb compote may not be the prettiest dish in the world, but I can assure you, it’s delicious. Go find a gardener to befriend and get your hands on some stalks. You won’t regret it and neither will they.