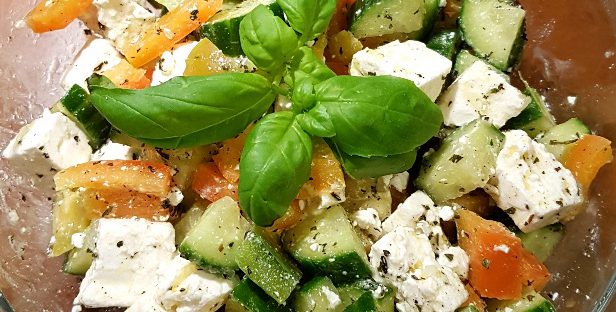 I’d say it’s fairly well known that I prefer my salads to be on the robust, substantial side, so it’ll not come as a surprise to you that this Cucumber and Mint Salad can be eaten either as a side dish to accompany a piece of grilled fish or chicken or on its own as a fresh lunch.

This Cucumber and Mint Salad in itself is very simple, comprising of just cucumber wedges, sliced bell pepper and cubes of salty feta cheese, but it’s elevated to something quite wonderful by the minty vinegarette it’s dressed in.

The standard vinegarette ingredients of white wine vinegar and olive oil are enhanced by the addition of dried mint and lime juice, creating a salad dressing which is tart, but herby at the same time. I’m not a big fan of salad dressings with a strong vinegar flavour, so I tend to make my vinegarette on the conservative side, but feel free to add more white wine vinegar or dried mint to yours, if you wish.

I make this Cucumber and Mint Salad a great deal because it’s perfect on the side of a piece of grilled salmon or chicken breast, but it also satisfies my appetite as a packed lunch at work. It’s just a great all-rounder salad choice.

Ingredients for the Salad Base:

Ingredients for the Salad Dressing:

The juice of 1 lime

Prepare the salad ingredients as directed and then place them in a large bowl.

Mix all of the salad dressing ingredients together and then toss it through the salad and serve.

The Fat Foodie Cookbooks are now available on Amazon Worldwide!

A while ago I was contacted by FODMarket to see if I would like to choose some of their low FODMAP products to taste test. I jumped at the chance and one of the items I asked for was their gluten-free pizza base mix that’s made by Grass Roots Bakery.

(I should note that aside from getting the free product I have no affiliate links with FODMarket and they’re not paying me to promote this product either.)

I made homemade pizzas last night using this pizza base mix and I’m not kidding, they were incredible! Even my pizza-loving, non-gluten-free eating step-son thought it was a ‘normal’ gluten pizza!

Although the taste of the pizza base dough itself is very nice and has the flavour of a standard pizza dough, I think its real strength lies in the texture of it because it manages to replicate the soft elasticity of gluten dough. This gives the pizza the real ‘chewy’ texture you expect from a quality dough and means that it doesn’t have the grainy texture that so many gluten-free pizza bases do.

Hand on heart, this is without doubt the best gluten-free pizza base I’ve ever eaten (including my own homemade dough made with gluten-free flour).

Since eating it my scientist brain has been wondering if it’s the blend of potato, tapioca and quinoa flour that makes it so light or whether they use more xanthan gum than I normally do, which would make it more pliable. Whatever the ratios, I’d pay good money to own the specific recipe they use!

Speaking of money, at present the Grass Roots Bakery Gluten-Free Pizza mix costs £3.99 from FODMarket which in my eyes is an absolute steal because it makes six 6″ pizza bases or three 12″ bases. That’s good value in my book for such a good quality product!

At the time of writing this review I’ve got the Grass Roots Bakery Gluten-Free White Bread Mix from FODMarket in my breadmaker and I’ll let you know my thoughts on it as soon as I can. I can’t wait to taste it!

The Fat Foodie Cookbook is now available on Amazon!

This Banana and White Chocolate Cheesecake could be described as an amalgamation of a banoffee pie and a soft cheese cheesecake. The base is composed of crushed gluten-free digestive biscuits which are packed down to form a crunchy layer before being topped with sliced bananas and a creamy white chocolate cream cheese mixture.

I really like this Banana and White Chocolate Cheesecake because, unlike a lot of desserts, it’s very light and yet it has no problem satisfying my sweet tooth. I use dairy-free white chocolate in my cheesecake mixture, but you could use dark chocolate if you’d prefer. It’d make a beautiful contrast to the light colour of the sliced fresh bananas.

If you’re looking for a delicious low FODMAP dessert to make then I’d highly recommend this Banana and White Chocolate Cheesecake. I’ve made it countless times and it’s loved by the whole family.

Ingredients for the Base:

Ingredients for the Filling:

1 firm yellow banana (with no dark spots on the skin)

Put the tin of coconut milk in the fridge overnight. (This helps the coconut fat solidify and makes it easier to remove it from the tin the next day.)

Crush the digestives until it resembles sand and then mix in the melted butter. Pour it into the baking tin and press down to form a base. Put it in the fridge to solidify.

Melt the white chocolate in the microwave, stirring extremely frequently to ensure it doesn’t burn. (I stir it every 10-15 seconds because it can burn really fast!)

Place the tinned coconut milk solids (the firm white coconut fat from the tin) and soft cheese in a microwaveable jug and heat it until it is warm. Stir the white chocolate into it.

Line the digestive base with sliced bananas and then pour the white chocolate cheesecake mixture on top and then put it back in the fridge. (I decorated mine with some dried strawberries, but you could use some dark chocolate, if you prefer, or leave it plain.) Serve.

We don’t eat a lot of spaghetti in our house because I tend to prefer my carbs in the form of vegetables or rice, but this recipe for Spaghetti al Pomodoro breaks the rule. I first made this Spaghetti al Pomodoro when my vegan step-son was visiting because I had a large pack of common tomatoes that needed to be used up and I wanted to make something for dinner that was fresh, but filling.

https://fodmarket.co.uk/ recently contacted me to see if I would like to try out some of their products and one of the ones that they suggested was Massel 7’s vegetable stock cubes. Massel is an Australian brand which makes a range of stock cubes which are low FODMAP because they don’t contain any onion or garlic. They’re also gluten-free and vegan.

After trying the Massel stock cubes in a number of recipes I have to say that I was really impressed. Considering that they don’t contain any strong-tasting vegetable extracts, such as onion or garlic, they worked extremely well as a high quality seasoning stock. They’re based around other herbs and vegetables (which include celery, cabbage, spinach and bay leaves) and can act as a light, but flavoursome stock for countless recipes.

(I should point out that I’m not being paid to say this, nor am I earning any affiliate commission from https://fodmarket.co.uk/ for this post either.)

Whenever I boil pasta I always add two or three stock cubes to the cooking water because I find that pasta is quite plain-tasting in general, but cooking it in the stock water infuses the cooked pasta with way more flavour. It might seem a bit luxurious to ‘waste’ stock cubes in this manner, but it really does make a huge difference to the overall taste of the pasta. Give it a go and see what you think.

If you’re in the mood for a light and fresh evening meal that celebrates humble, yet delicious, ingredients, such as tomatoes and pasta, then you can’t go wrong with Spaghetti al Pomodoro. With a simple topping of grated parmesan (or a non-dairy version) and freshly torn basil leaves you’ve the makings of a very satisfying supper.

To make the sauce put a saucepan over a medium heat and add the tomatoes, red wine vinegar, olive oil, sugar and water. Bring to a simmer and let the tomatoes steadily pulp down. Add more water if you think the mixture is getting too dry.

Put a large saucepan over a medium-high heat (and add stock cubes to the cooking water, if you like) and cook your spaghetti until it is done to your liking.

Once the tomatoes have broken down and the sauce is thick add salt and pepper to taste.

Drain the spaghetti and then mix the pomodoro sauce through it before serving it with fresh basil leaves and grated parmesan.

The Fat Foodie cookbook is now available from Amazon!