This Banana and White Chocolate Cheesecake could be described as an amalgamation of a banoffee pie and a soft cheese cheesecake. The base is composed of crushed gluten-free digestive biscuits which are packed down to form a crunchy layer before being topped with sliced bananas and a creamy white chocolate cream cheese mixture.

I really like this Banana and White Chocolate Cheesecake because, unlike a lot of desserts, it’s very light and yet it has no problem satisfying my sweet tooth. I use dairy-free white chocolate in my cheesecake mixture, but you could use dark chocolate if you’d prefer. It’d make a beautiful contrast to the light colour of the sliced fresh bananas.

If you’re looking for a delicious low FODMAP dessert to make then I’d highly recommend this Banana and White Chocolate Cheesecake. I’ve made it countless times and it’s loved by the whole family.

Ingredients for the Base:

Ingredients for the Filling:

1 firm yellow banana (with no dark spots on the skin)

Put the tin of coconut milk in the fridge overnight. (This helps the coconut fat solidify and makes it easier to remove it from the tin the next day.)

Crush the digestives until it resembles sand and then mix in the melted butter. Pour it into the baking tin and press down to form a base. Put it in the fridge to solidify.

Melt the white chocolate in the microwave, stirring extremely frequently to ensure it doesn’t burn. (I stir it every 10-15 seconds because it can burn really fast!)

Place the tinned coconut milk solids (the firm white coconut fat from the tin) and soft cheese in a microwaveable jug and heat it until it is warm. Stir the white chocolate into it.

Line the digestive base with sliced bananas and then pour the white chocolate cheesecake mixture on top and then put it back in the fridge. (I decorated mine with some dried strawberries, but you could use some dark chocolate, if you prefer, or leave it plain.) Serve.

I created this recipe for Blueberry Buckwheat Pancakes because, as I mentioned in my last blog post, at the end of last year FODMarket UK (https://fodmarket.co.uk/) offered to gift me some low FODMAP products in exchange for reviewing them on my website and one of the products I decided to ask for was a box of buckwheat flour, which they’ve recently begun to stock in their online shop.

(I should add that I’m not being paid for reviewing this product and I don’t have an affiliate link for this product with FODMarket either.)

For all that its name contains the word ‘wheat’, it’s actually a gluten-free grain which has a whole range of uses in the culinary world. I’ve wanted to try cooking with buckwheat for quite some time, not because it’s gluten-free, but because it is renowned for its naturally nutty taste and I’m pleased to say that I wasn’t disappointed in the slightest.

The recipe I list below makes four generously-sized buckwheat pancakes which can either serve two people or four. I served my partner and I two each for breakfast though and we both agreed that one was quite sufficient, especially when served with fruit on top.

The blueberry buckwheat pancakes are a bit drier than a standard gluten-free pancake, but they’re infused with a delicious nuttiness throughout which complements the syrup and fruit you choose to serve with them. Quite frankly, we enjoyed every mouthful!

You can buy this buckwheat flour from https://fodmarket.co.uk/ and they offer a flat delivery fee of £3.49 or free delivery with orders over £50. Personally, I think that’s pretty reasonable especially if you were going to be stocking up your cupboards to ensure you’re all set to embrace the low FODMAP diet. If you do go ahead and buy this buckwheat flour (or you make these buckwheat pancakes) I’d love to know what you think!

Simply place all of your ingredients (except the butter and oil) into a large jug and whisk together until fully combined.

Place a non-stick frying pan over a medium heat and add the butter and oil. (The inclusion of the oil stops the butter from burning.)

Once the butter has melted add a quarter of the pancake mixture into the centre of the frying pan and allow it to cook until lots of bubbles have formed on the top.

Gently, but quickly, flip the pancake over and cook until both sides are golden brown. Repeat with the rest of the pancake mix until you’ve used it all up. 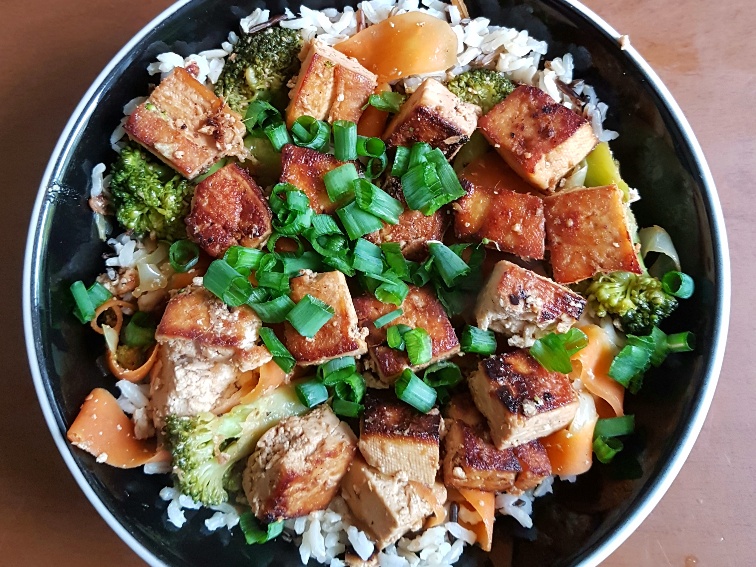 Stir-Fried Ginger Tofu with Rice by The Fat Foodie

I’m relatively new to the wonders of tofu, but I’m steadily becoming a fan and I guarantee that you’ll become one too if you make this stir-fried ginger tofu with rice. If you can, it’s best if you leave the ginger tofu to marinade overnight to really let it absorb the aromatic flavours, but you can also just let it marinade for an hour or so before using it, if you like. END_OF_DOCUMENT_TOKEN_TO_BE_REPLACED 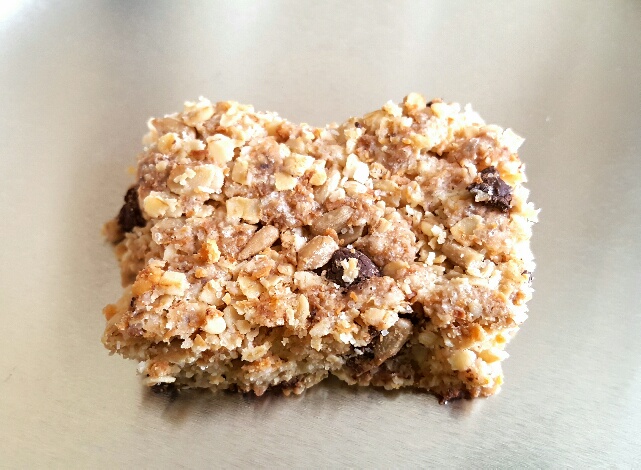 After recently deciding to try the FODMAP diet in an attempt to get my IBS under control I realised that I’d need a good recipe for a dairy-free and gluten-free biscuit that wouldn’t hurt my tummy. After some investigation I figured that oaty Anzac biscuits were the way to go because they are made of low FODMAP ingredients, but are still very tasty and satisfying.

Anzac biscuits are a sweet oat-based biscuit that was originally baked by the wives of men who were in the Australian and New Zealand Army Corps (ANZAC) during World War I. The hard tack biscuit was perfect for sending to men who were fighting abroad because its ingredients did not go off easily and so the biscuits travelled well. However, the biscuits were also enjoyed on the home front, being served at fundraising events such as fetes and galas to raise money for the war effort.

When I started making the mixture I wasn’t entirely convinced that the Anzac biscuits would hold together upon baking because the texture of the mixed ingredients was very loose, so I packed my biscuit mix into a baking tin and baked it whole and then cut it into individual pieces while it was still warm. However, once they had went completely cold I realised that they would probably work fine as individual biscuits because once they’d been baked they hardened into crispy little slices that were crumbly, but not overly so, and kept their shape very well.

I baked mine with some leftover vegan dark chocolate chips I had in the kitchen cupboard that needed used up and they were delicious in the biscuits, but I think that the next time I make them I’ll add the chocolate chips, but I’ll also decorate them with a drizzling of melted dark chocolate to further enhance the chocolatiness of the Anzac biscuits. Oats, coconut and chocolate go so well together, don’t you think?

Although these biscuits are made with gluten-free oats

, if you’re not gluten sensitive then just use normal oats and flour (they’re considerably cheaper, so lucky you!). Regardless of whether you make these with or without gluten you’ll be rewarded with a very lovely oat and coconut sweet biscuit that’s crunchy, but crumbly. It’s everything you could possibly want in a biscuit really.

Soak 1 tbsp of chia seeds in 3 tbsps of cold water for half an hour.

(if you’re making individual biscuits) or a baking tin

(if you’re making one large bake and then cutting it into squares, like I did) with greaseproof paper.

Melt the coconut oil and then put all of the ingredients into a large bowl and mix to combine.

and press them down slightly so they form a little patty, or if you’re baking it as a whole, tip the mixture into the baking tin

and press it down.

Bake in the oven for 25-30 minutes until the biscuits are golden brown.

Remove from the oven and, in the case of the individual biscuits, leave to cool. If you’ve made one large bake, then leave it in the tin, but cut it into squares while it’s still warm. Wait until the biscuit is totally cold before removing from the baking tin. 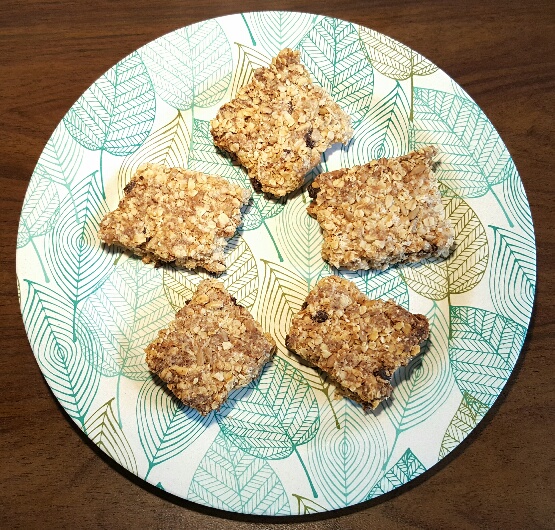 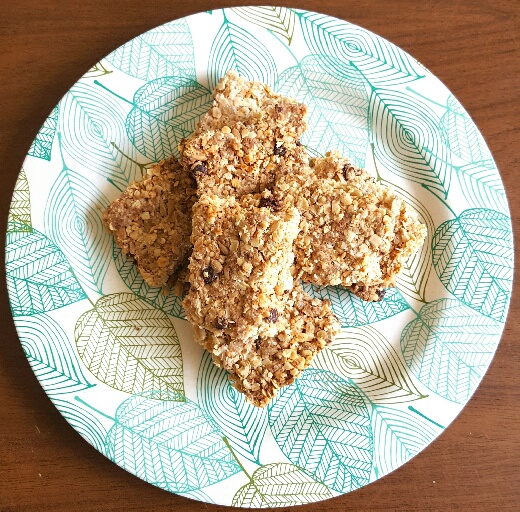