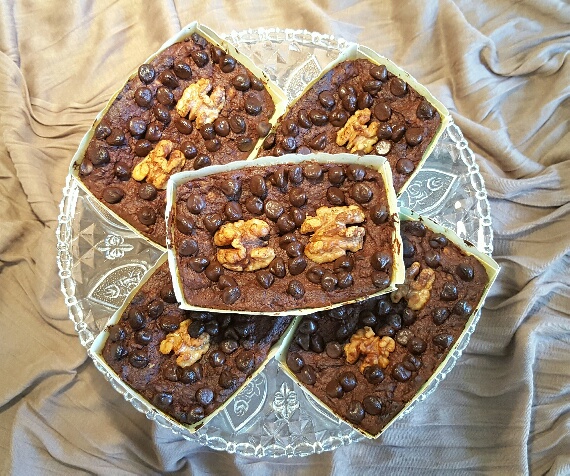 My friend Jen, is a doula (who is, in her words, a person who “provides physical, emotional and informational support to families helping them to reduce fear, pain and uncertainty during their birth experience“). Jen runs her own doula business, Your Birth Scotland, and she recently asked me if I’d develop a few low FODMAP recipes that were quick to cook and healthy for women who are either pregnant or have recently given birth and I accepted her challenge.

These sweet potato brownies were created because I was looking to create a recipe for a snack that would contain a decent amount of nutrients and fibre for mums who had recently given birth. Now I’m not going to lie, they didn’t turn out quite as healthy as I’d envisioned because they have quite a bit of sugar in them. However, on the plus side, they ended up being literally the best brownies I’ve ever eaten in my entire life.

Sweet potatoes are a really healthy vegetable and, unlike normal white potatoes, they count towards our five-a-day quota because they have lower starch levels than other carbohydrates. They also contain four main micronutrients: vitamin C, which keeps our immune system healthy and aids iron absorption within the body (very important for both pregnant women and women who have recently given birth); thiamin, an essential B-vitamin which supports the nervous system and ensures good heart health; potassium, which normalises blood pressure and along with thiamin takes care of the nervous system; and manganese, which ensures healthy bones and general cell health. I think it’s fairly clear that they’re nutritional powerhouses within the vegetable world!

These sweet potato brownies also contain other ingredients which are high in nutritional density, such as walnuts which are an excellent source of antioxidants as well as omega-3 fat, an anti-inflammatory fatty acid that the body and mind needs to function properly. The brownies also contain chia seeds, a high protein seed which along with providing the body with fibre, also contains omega-3s and a whole host of micronutrients, such as calcium and magnesium, all of which support overall health. The brownies have also got coconut oil in them, a source of healthy fat which helps to remove bad fat from the blood and lower cholesterol and therefore, promotes heart health and lowers the risk of heart disease.

Lastly, the brownies have a healthy whack of antioxidant-rich cocoa and dark chocolate in them, which contain minerals like potassium, iron, zinc and selenium, and has been found in a Finnish study to lower stress in pregnant women while also producing babies who smiled more in comparison with babies born to non-chocolate eating mothers. Dark chocolate also contains phenylethylamine, a chemical which encourages the release of feel-good endorphins.

After I baked the brownies and let them cool slightly I started to take my photographs and once that was done I figured it was time to have a taste. And wow! Without overly blowing my own trumpet (but I will because they were outstanding) I was blown away by how good they were. I’m not a fan of most brownies because I hate that undercooked texture of the cake mix that so many of them have, but these didn’t have that. They retained the fudgy element of a brownie that you’d expect, but weren’t thick and claggy. Quite surprising considering they contain sweet potato!

Another bonus to these sweet potato brownies is that they are vegan, dairy-free and gluten-free and you cannot tell at all. The cake base is light, but fudgy, and is speckled with little chunks of walnut and their overall chocolate quota is further enhanced by the addition of dark chocolate chips lying atop the brownies. Sigh… They’re just out of this world!

and they were perfect for baking the brownies in because they helped them to retain their shape and worked perfectly as individual bakes (as opposed to having to cut them out of a tray). This also meant that they were ideal for slotting into my packed lunch box to take to work.

This sweet potato brownie recipe has most definitely become my new go-to brownie recipe and although they may not be the healthiest pregnancy or postpartum snack, doesn’t every new Mum deserve a little treat once in a while for all her hard work? I certainly know that Jen the doula would think so.

(I use Dove’s Farm G/F flour

100g walnuts (keep 16 walnut halves aside to decorate the brownies)

2 chia eggs made from 2 tbsps. of chia seeds mixed with 6 tbsps. of cold water and left for half an hour before using (or 2 eggs, if non-vegan)

7 tbsps. of rice milk (or standard milk, if non-vegan)

on a baking tray.

Peel your sweet potato and cut into small cubes (about 2cm square). Place in a bowl and cook on high in the microwave (stirring a couple of times) until the sweet potato is soft.

Keeping the decorative walnut halves and dark chocolate chips aside, put all of the ingredients together in a large mixing bowl and whisk together.

Once the mixture is fully combined, spoon into the mini loaf baking boxes

(making sure there’s an equal amount in each) and then top with the walnut halves and sprinkle with dark chocolate chips.

Bake in the oven for 30 mins (or a little less if you prefer your brownies to be gooier).

Remove from the oven and leave to cool slightly before eating. 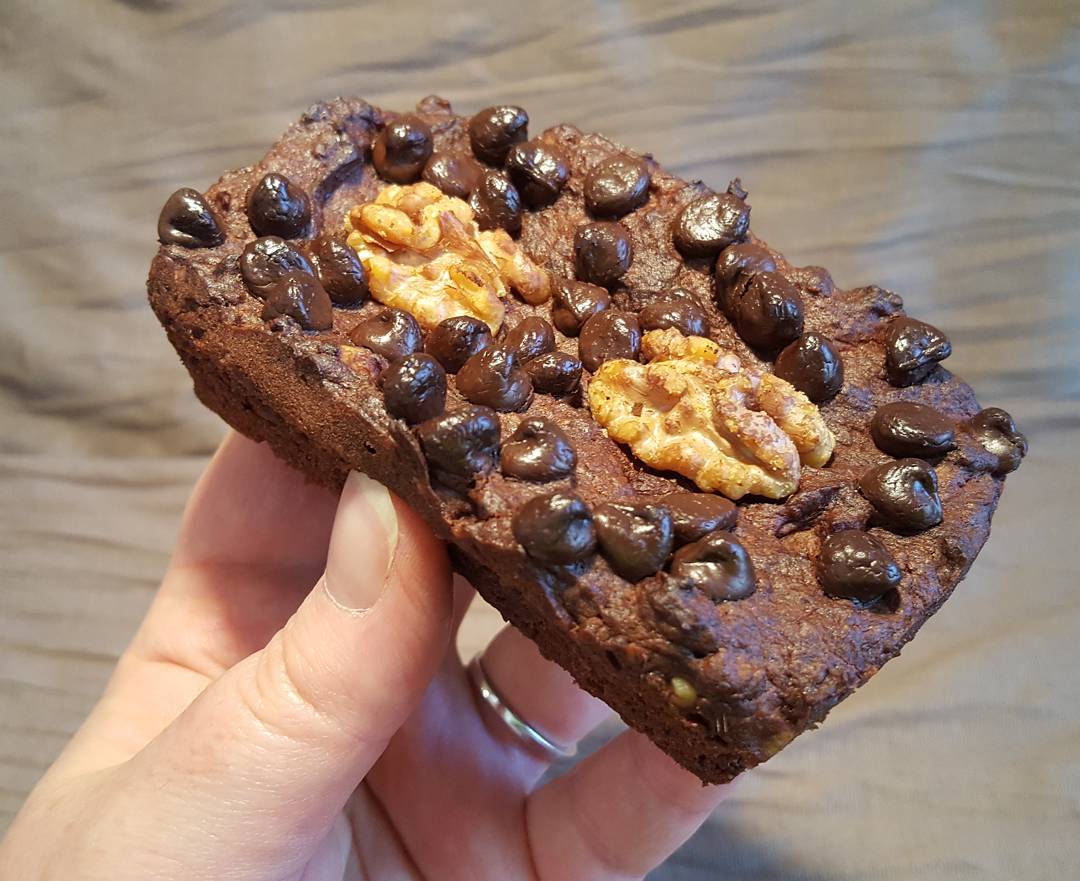