I’ve always been under the strong impression that chocolate profiteroles and the choux pastry they are built from were really difficult to make, requiring a lot of ingredients and skill to produce them. After all, whenever they’re featured on The Great British Bake Off they make such a song and dance about the difficulty of the task ahead of them that they must be hard to make, right? No, wrong actually! I can now confirm that this is not the case, they are made from very few ingredients and they are actually incredibly easy to bake!

I was really surprised at how little work was involved in making the chocolate profiteroles. Now, I did use my food processor

to mix the dough together, which most definitely lessened the strenuousness of the task, but I suspect that most people nowadays have at least an electric whisk in their kitchen cupboards that would do the same job. I think that if you try to make choux pastry by hand you’ll be stirring until the cows come home and you might fail to get the same smooth, glossy finish that’s required from the pastry dough.

Chocolate profiteroles always seem like such an indulgent and decadent dessert due to their whipped cream filling and slathering of chocolate that coats them, but they’re actually really cheap to make. In fact, I’d estimate that the entire batch I made, which produced 14 profiteroles, cost around £1.40 to make. That’s not bad for a dessert that’s renowned for being really expensive.

It was surprisingly easy to make these profiteroles free-from. I did wonder how they would turn out if I made them with gluten-free flour, but I can happily confirm that they taste just the same as the normal version! Everyone who ate them said that they would never have known that they were gluten-free if I hadn’t told them. I filled my profiteroles with lactose-free double cream, but you could easily fill them with a non-dairy alternative, such as a whipped blend of coconut cream mixed with icing sugar or even cold Bird’s vanilla custard made with rice milk. (I actually think that if I were to make them for people who are dairy intolerant I wouldn’t try to fill them at all and would simply serve them in bowls drizzled with chocolate sauce and a non-dairy cream.)

As I’ve said, the batch I made produced 14 profiteroles, but with hindsight I’d have made them much smaller. Choux pastry is a strange dough that seems very loose and almost liquid when you pipe it onto the baking tray. Therefore, when I was piping it onto my greaseproofed baking trays I was reluctant to make the mounds too small in case they didn’t puff up enough. I should have trusted myself though because they puff up considerably in the oven, so smaller profiteroles would have been fine. As a result, my profiteroles were oddly shaped and too large, but next time I’ll trust the dough to do its thing.

Also, when it came to making my chocolate topping my melted chocolate began to seize (I suspect a dash of water had accidentally got introduced into the mix) so I had to quickly shape it into chocolate discs to sit on top of the profiteroles, but when I make them again I’ll just drizzle them with a simple chocolate sauce made from melted chocolate mixed with a bit of sugar and cream.

because they make life so much easier. You’re able to fill a piping bag with the choux pastry without having to worry about having to thoroughly wash it out before you fill it with whipped cream and then go through the same palaver when you need the piping bag for the chocolate sauce. I buy my disposable piping bags from Poundland and they do the job perfectly, but you can also buy them from Amazon.

If you follow this recipe you’ll be rewarded with a light all-butter choux pastry dome that encases a thick, sweetened whipped cream centre and is topped with a generous layer of dark chocolate sauce. They’re the perfect dessert to make if you want to impress your friends and family. 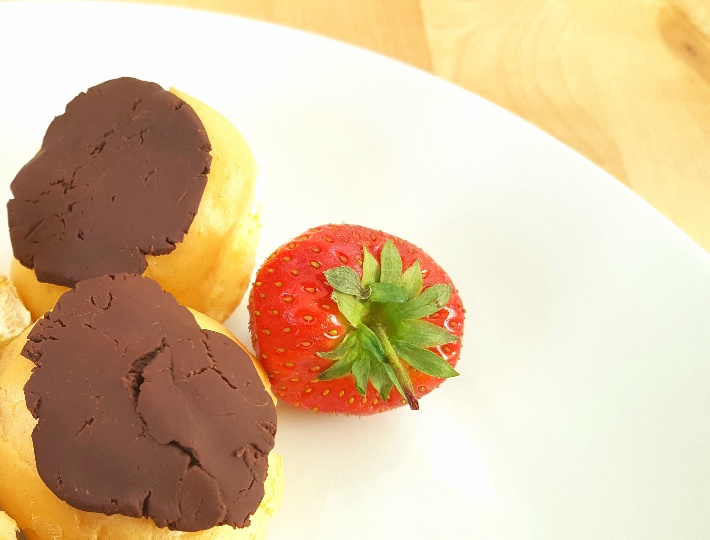 Ingredients for the cream filling:

To make the chocolate sauce:

and have a disposable piping bag

Put the flour and sugar into the food processor

Crack your eggs into a separate bowl, beat them and then leave to one side.

Put the butter and boiling water into a microwavable jug and heat it in the microwave until it is boiling. (You can use a saucepan over a medium heat if you’d prefer.)

Pour the hot water and butter into the food processor

and blend the mixture for 1 minute.

Leave it to cool for a few minutes and then add the eggs and blend the mixture again until the dough looks smooth and glossy.

Transfer the dough into a piping bag and pipe small mounds (approximately 1 teaspoon’s worth) onto the greaseproofed baking trays, leaving a gap of a couple of centimetres between each mound of dough.

Bake in the oven for 20 to 25 mins or until the choux pastry profiteroles are golden brown.

Remove from the oven, place on a cooling rack and spear the side of each of them with a small sharp knife before leaving to cool. 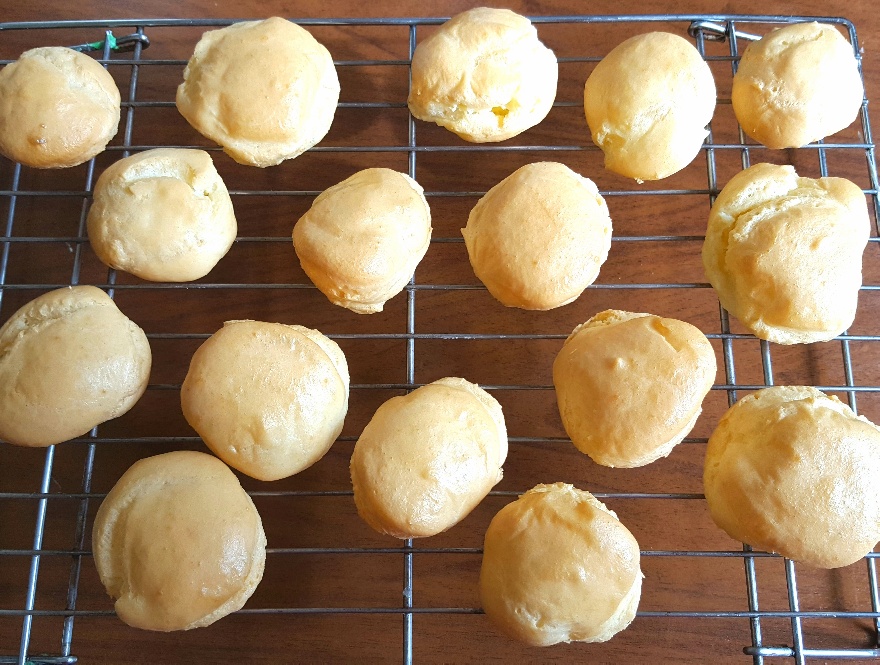 Once the profiteroles are cold, whisk the cream with the icing sugar until thick, transfer into a piping bag and pipe the whipped cream into each profiterole until it is full.

To make the chocolate sauce put the cream and sugar in a saucepan and stirring all the while, heat until the sugar has dissolved. Add the chunks of dark chocolate and stir until the chocolate had melted and become one with the cream.

Serve the cream-filled profiteroles in dessert bowls with a generous topping of chocolate sauce.