A while ago I was contacted by FODMarket to see if I would like to choose some of their low FODMAP products to taste test. I jumped at the chance and one of the items I asked for was their gluten-free pizza base mix that’s made by Grass Roots Bakery.

(I should note that aside from getting the free product I have no affiliate links with FODMarket and they’re not paying me to promote this product either.)

I made homemade pizzas last night using this pizza base mix and I’m not kidding, they were incredible! Even my pizza-loving, non-gluten-free eating step-son thought it was a ‘normal’ gluten pizza!

Although the taste of the pizza base dough itself is very nice and has the flavour of a standard pizza dough, I think its real strength lies in the texture of it because it manages to replicate the soft elasticity of gluten dough. This gives the pizza the real ‘chewy’ texture you expect from a quality dough and means that it doesn’t have the grainy texture that so many gluten-free pizza bases do.

Hand on heart, this is without doubt the best gluten-free pizza base I’ve ever eaten (including my own homemade dough made with gluten-free flour).

Since eating it my scientist brain has been wondering if it’s the blend of potato, tapioca and quinoa flour that makes it so light or whether they use more xanthan gum than I normally do, which would make it more pliable. Whatever the ratios, I’d pay good money to own the specific recipe they use!

Speaking of money, at present the Grass Roots Bakery Gluten-Free Pizza mix costs £3.99 from FODMarket which in my eyes is an absolute steal because it makes six 6″ pizza bases or three 12″ bases. That’s good value in my book for such a good quality product!

At the time of writing this review I’ve got the Grass Roots Bakery Gluten-Free White Bread Mix from FODMarket in my breadmaker and I’ll let you know my thoughts on it as soon as I can. I can’t wait to taste it!

The Fat Foodie Cookbook is now available on Amazon! 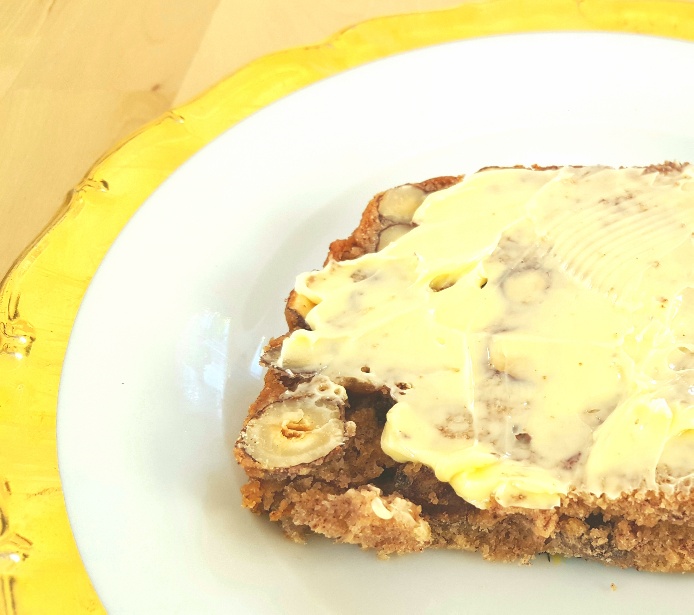 I recently acquired a breadmaker from a friend and I’ve been looking for something to bake in it for a while. I remember that when breadmakers first came out they were really expensive and cost well over £100 to buy, but nowadays you can pick them up really cheap. In fact, I’ve just Googled it and you can buy one for £21:49 from Argos! It’s insane how much prices decrease after the initial fad dies down, huh?

Anyway, as I was saying, the breadmaker I inherited from my friend is only a Tesco version (I think she paid around £30 for it a number of years ago), but it does the job very nicely because for all that it’s only a supermarket version it’s still got 3 crust colour settings and a range of cooking options to suit whatever bake you’re making. That’s good enough for me!

After a couple of failed attempts at making gluten-free loaves in it (spoiler alert – these were massive failures!) I decided to park my lofty notions of creating the perfect, light and airy gluten-free loaf aside and try to make a gluten-free banana bread instead. Thankfully this was a much more successful endeavour!

Although I enjoy banana cakes sometimes I prefer banana breads because they have a firmer texture and are more substantial. They also don’t need as much sugar in them so you can kind of justify having a small slice of the bread for breakfast. In fact, if you have the option on your breadmaker to start cooking your loaf at a specific time (which many modern models do) you could wake up to a freshly baked banana hazelnut bread that’s just begging to be coated in butter and eaten with your morning cuppa.

Ripe bananas (i.e bananas which are very yellow and have brown spots on them) are high  FODMAP, so don’t use them for this banana bread. However, firm bananas (yellow and firm with no spots) are low FODMAP, so use this type. This banana hazelnut bread makes at least 12 portions, with one serving being low FODMAP.

I’d encourage you to give this breadmaker banana hazelnut bread a go because it’s genuinely delicious. This recipe makes a loaf that’s infused with the delicate flavour of fresh banana and is studded with crisp, crunchy little hazelnuts. It’s lovely on its own, but I think it’s elevated into something utterly divine when it’s topped with a generous slathering of salted butter. You only live once, right?

250g gluten-free self-raising flour (I use Dove’s Farm G/F flour because it’s made with low FODMAP ingredients whereas many other gluten-free flours are made with high FODMAP options.)

Place all of your wet ingredients into your breadmaker

and then add the dry ingredients.

Choose a setting that will bake the loaf for around two and a half hours with a light crust.

Check to see if the loaf is cooked by pushing a skewer into the middle of it. If the skewer comes out clean then it’s cooked. If necessary continue to cook for a bit longer.

Once it’s done remove from the breadmaker

and leave to cool inside the tin.

Once cool, cut into thick slices and serve either on its own or with butter. 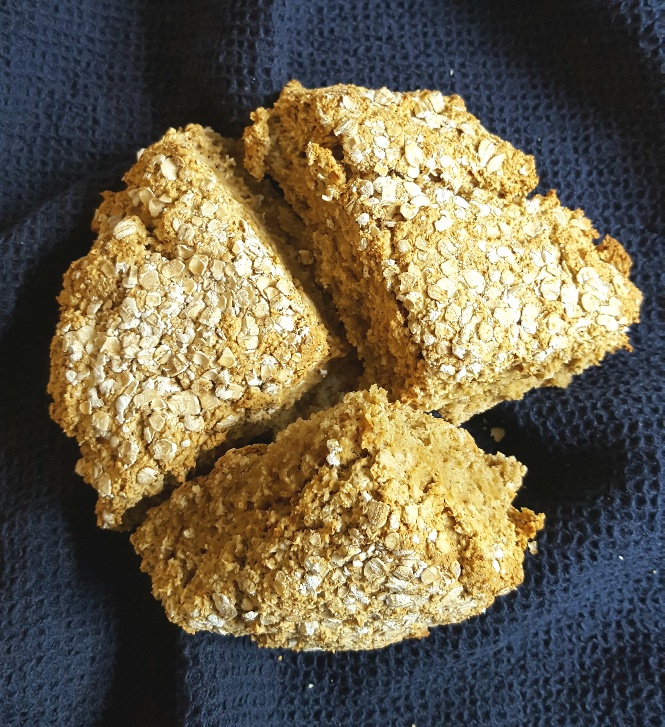 Gluten-free bread doesn’t rock my world in the slightest. It’s gritty, grainy and dry. It’s everything a loaf shouldn’t be and that makes me sad. However, I recently visited family in Ireland (stopping off to see Phil Collins in concert along the way too, which was freakin’ awesome!!!) and after a delicious breakfast of traditional Irish toasted soda bread with butter and jam I realised that I could abandon my yeast-based attempts at making a gluten-free loaf and focus instead on making a bicarbonate of soda based oat bread.

My previous attempts at making gluten-free bread have produced somewhat mixed results. I think this is because gluten-free flour tends to be very dry and produces a really dense crumb when baked into a loaf. However, this gluten-free soda bread incorporates oat flour, which I simply made by blitzing some oats in my food processor, which helps to add a lightness to the loaf and enhances the texture of the bread.

Although soda-based loaves are found in the history of many countries, in times gone by, a soda bread loaf was traditionally freshly made every morning by Scottish and Irish women because it’s really quick to produce. Instead of using yeast which takes a long time to prove, soda bread uses alkaline sodium bicarbonate as its raising agent which is activated by acidic buttermilk (or in this case lemon juice) to produce carbon dioxide bubbles which make the bread rise. This results in a robust, but flavoursome loaf which is gorgeous when spread with fresh butter.

This recipe is just for making a standard plain gluten-free soda bread, but you could easily incorporate raisins, dried cranberries or different types of nut into the base bread mix to produce a variety of loaves. I’ll bet a soda bread made with plump little raisins and crunchy walnuts would be outstanding!

The gluten-free soda bread produced by this recipe is soft, but substantial and is surrounded by a lovely golden crunchy crust, while its interior crumb is moist and has a faintly nutty flavour from the oat flour. It’s practically begging to be sliced while still warm and coated in butter and generously topped with good quality jam.

1 tsp of bicarbonate of soda

Pour the milk into a jug and add the lemon juice.

Place all of your dry ingredients into a large mixing bowl and stir well.

Once the milk has curdled and become thick add it to the dry ingredients and stir until it starts to come together.

Get your hands into the bowl and continue mixing it until it forms a ball.

Place it on the baking tray and flatten slightly before scoring it with a cross and baking for 35 mins. 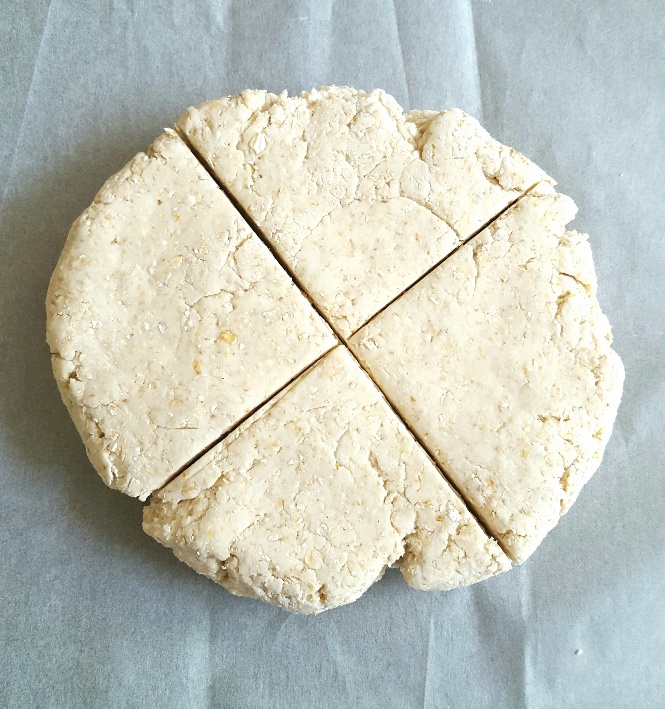 Turn it over and bake for about another 10 mins. You’ll know it’s cooked when the base sounds hollow when tapped.

Leave to cool slightly before serving. 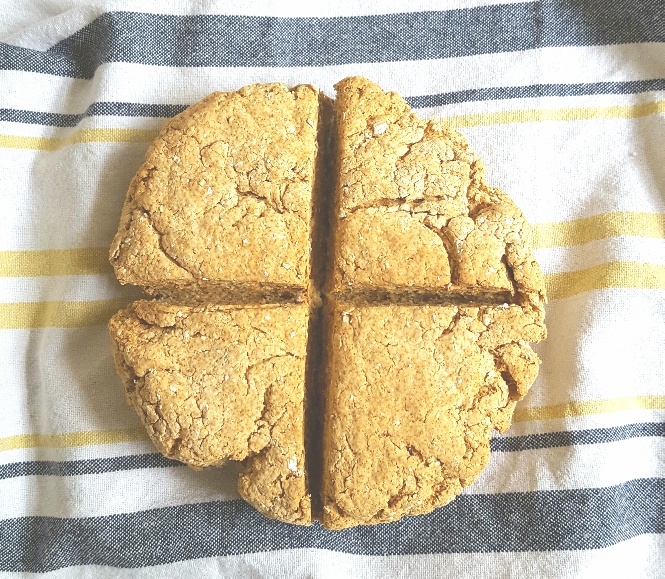 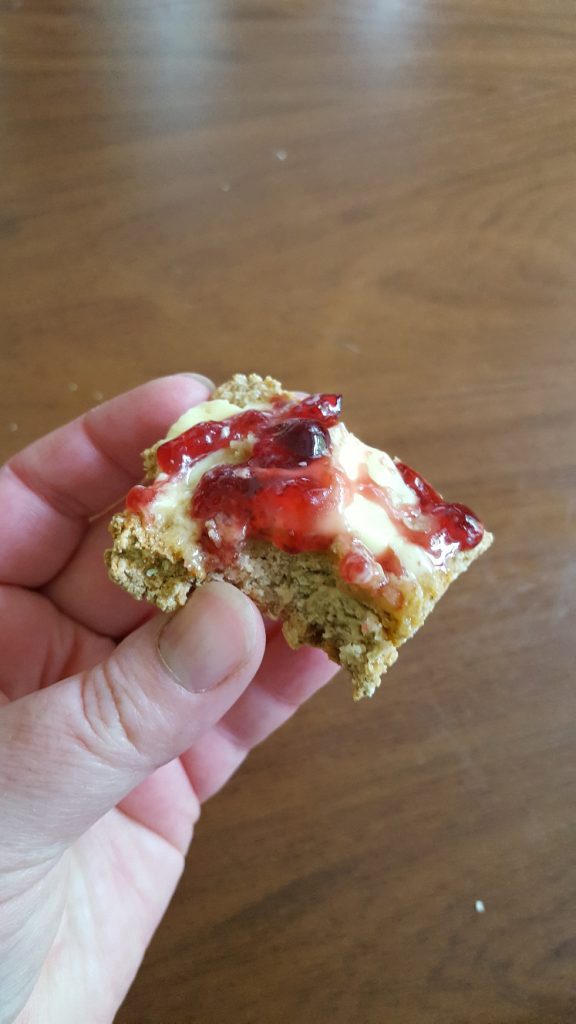