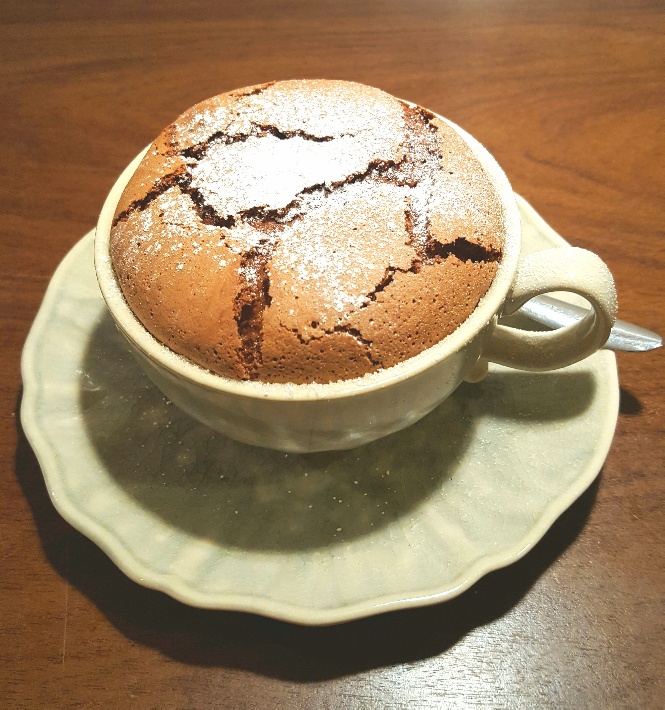 Chocolate Soufflés by The Fat Foodie

I’m a big fan of Masterchef, particularly the professional series, so I really enjoyed settling down to watch it the other evening with a cup of tea and a Tunnock’s teacake. One of my favourite parts of the show is the skills test, which sees Marcus Wareing or Monica Galetti set the chefs a test which challenges their skills set and knowledge base. One of these tasks was for the chefs to attempt to make a soufflé and as I was watching I realised two things. One, that soufflés are a great idea for a low FODMAP dessert option. And two, that I’ve never attempted to make a soufflé myself before, so I resolved to try making one the next day.

I figured that chocolate soufflés would be really tasty and would probably be the easiest type to make because it wouldn’t involve me having to make a fruit curd or anything in advance. Now, I should warn you that these soufflés are really rich. I made four soufflés, one for each of us, but I wish I’d stretched the soufflé mixture out into six pots because, although they’re utterly delicious, they’re very rich and filling.

I don’t have any ramekins

so I just made my soufflés in small oven-proof cups I had in the cupboard and they worked just fine. I should also point out that you can’t make the soufflés in advance because they’ll sink as they cool down, so you’re better to make them just after you’ve eaten dinner so you can serve them straight from the oven.

These chocolate soufflés are really easy to make and are very rewarding in the taste department. Their firm surface hides an incredibly delicate, soft and airy interior that is enriched with the decadent flavour of good quality melted dark chocolate. You could serve them with a drizzle of cream or even a scoop of soft ice-cream, but as far as I’m concerned a light dusting of icing sugar and a spoon does the job quite nicely too.

2 tbsps butter or non-dairy version (for preparing the ramekins)

(or small oven-proof cups) to one side and preheat your oven to 200C/Fan 200C/Gas Mark 7 and place a baking tray inside.

Brush each of the ramekins

thoroughly and generously with butter and dust the insides with caster sugar before placing them in the fridge.

In a large bowl, melt the dark chocolate and coconut oil together and then leave it to cool. (I used the microwave, but I kept my eye on it all the time and stirred it very frequently so the chocolate didn’t burn.)

In another large bowl, use an electric whisk

to whisk the egg whites until firm and then whisk in the caster sugar a teaspoon at a time until it is all combined.

Once the chocolate is cool mix in the egg yolks.

Delicately fold a little of the whipped eggs into the chocolate mixture and then steadily add the rest of the egg whites in, gently folding all the while.

Once the mixture is combined, fill your ramekins

with soufflé mixture to the top, level them off and run your finger around the inner rim to leave a slight depression around the inside.

Bake in the oven for 8 to 10 mins or until they have risen and have a very slight wobble when you move the baking tray. (Don’t open the door during the cooking process otherwise they’ll sink!)

Once they’ve risen and you’re satisfied they’re cooked, take them out of the oven, quickly dust them with icing sugar and serve. 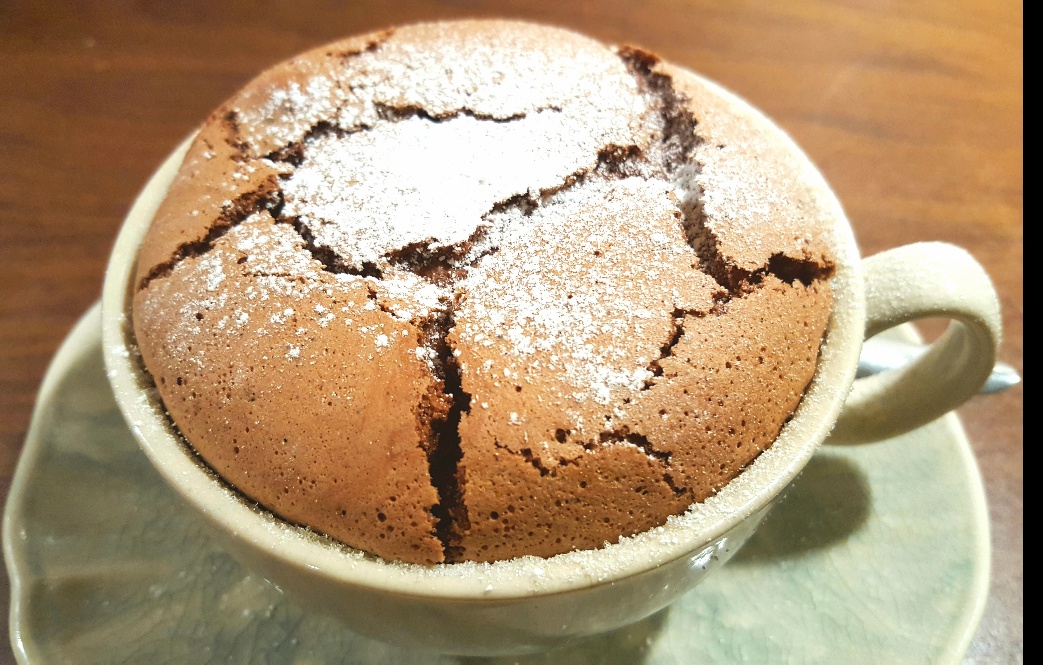 Chocolate Soufflés by The Fat Foodie